“Gotta shower quick.” He told me.

That’s so nice. Getting his cock and ass fresh for me.

“Ok let me know when you’re on the way.” I responded. “Can we make a short video of me sucking you with my phone?” I asked.

I was feeling adventurous. Also I’m constantly asked for videos, which I don’t really have. In the past have let guys take photos of me sucking them—but not many. Some of you might have seen them seen them posted on Craigslist though. I figured it was time to get some new material to share with those inquiring about me.

He has a gf so we don’t want a photo of him floating around getting sucked off by a guy in a wig. That would not be good! But if it’s just his cock he really should have to worry about anything.

“About how long?” I asked him.

I’m getting good at getting ready fast. In 15 minutes I quickly shaved my face. Put on a pair of panties, fishnet stockings, a black shirt, padded bra and a tight dark long sleeve top. The hair goes on last. I dimmed the lights, put on some music and lit some incense. I was ready for his cock.

“Okay come to the front door and follow me downstairs.” I instructed him.

The front door was slightly cracked open. He came in and followed me downstairs. He’s been here before so it was going to be a smooth encounter. He started getting undressed and I got on my knees in front of him—rubbing his big thick cock through his briefs. His big cock was getting hard fast.!

It popped out and firmly dangled in front of me so I began to lick it. He looked down upon me as I licked and sucked his cock like a good slut should. I loved the way it feels—the way it tastes. My job is to give him the pleasure that he seeks and that is what I’m doing—helping him get the load out.

He’s naked now and lays down across the bed. I’m concentrating on his cock but I know his ass needs attention too. I think I’m the only one that’s been down there. My tongue swirls up and down his cock, around his balls then under his ballsac—slowly making my way to his tight hole. He’s moaning and mumbling something. I think he said “What am I doing!” but I’m not sure. He was enjoying himself but at the same time thinking about our naughty arrangement—getting his cock and ass worked on good by a guy dressed up. What does it really matter? Now one will know about our secret arraignment except those of you reading about it.

He squirmed and tensed as my tongue penetrated his hole and I began licking it. Next his legs were up in the air, spread wide allowing me to rim him deep. I love it when guys take this submissive position. You have to be really comfortable and enjoying yourself to raise your legs up on the air and then expose your asshole to me. But guys need to be licked down there—they don’t really know it until they had it for the first time or if they already been playing with their holes in private while they jerk off. Guys assholes need attention too.

I don’t see him often so I figured let me try and make the visit last a little longer. He repositioned himself so his head was on the pillow and legs spread wide I could get in between his legs and start sucking his thick cock again. I had my poppers handy—enjoying a few whiffs of the fluid to give me a head rush wile his dick was throbbing in my mouth.

“Did you want to make the video” He asked.

“Okay.” I got my phone, turned on my camera and handed it to him.

I was getting worn out with all the work I was doing and needed some help. So I reached in the drawer next to my bed and pulled out a small butt plug—it was the smallest one I had.

I quickly lubed up the toy so he didn’t have time to think about it and massaged it against his hole. I was going to slide it right it—I need to be delicate. When I did make the move it went it smoothly gliding up his butt as he moaned out loud.

I went back to sucking his cock while at the same time working my toy slowly in and out of his hole. After a few moments he took hold of the toy so he could control it and I focused on his throbbing cock that was about to explode. 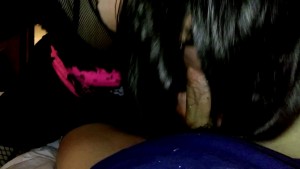